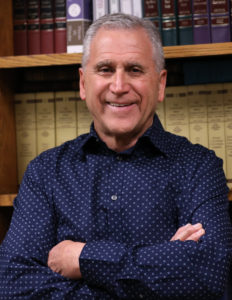 Somebody Loves You Radio

On November 29, 1975, 3 years after accepting Jesus Christ, Raul Ries was ordained by Calvary Chapel Costa Mesa and his small home Bible study grew into the Fox Theater, then to Calvary Chapel West Covina and eventually into Calvary Chapel Golden Springs in Diamond Bar, California in 1993.

Although already ordained, Ries desired to study God’s Word more in-depth so he attended APU where he received his Master of Ministry, a Master of Divinity and a Master of Arts in Religion between 1976 and 1990. He went on to Fuller Theological Seminary to receive his Doctorate of Ministry in 1992.

Ries believed that he would teach and preach his entire life. However, his ability to serve the Lord almost came to an end in February, 2007. At his Wednesday evening service, Raul knew something was wrong physically but what lay ahead was unexpected.

Raul experienced flashbacks for the first time since the Vietnam War.

He knew, rationally, that he was in his home but the fears of war came rushing back. He lay prostrate in his home, praying and praising the Lord as tears ran down his face. He and his wife, Sharon, thought their time in ministry was over.

The flashbacks grew more frequent and more intense. After testing, he was diagnosed with seizures that affect the five senses.

His family, the body of Christ and Pastor Chuck Smith prayed for him and he felt the Holy Spirit heal him. He has not experienced another flashback.

In addition, he pastors a congregation of more than 14,000 people.

Through conferences in the states and throughout Latin America, Raul seeks to equip the saints for the ministry. He and Sharon have been married for almost 40 years, and share the same desire to serve the Lord and see souls saved for Christ.