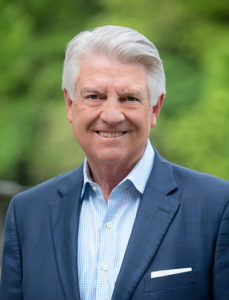 Dr. Jack Graham is the pastor of Prestonwood Baptist Church, one of the nation’s largest, most dynamic congregations.When Dr. Graham came to Prestonwood in 1989, the 8,000-member congregation responded enthusiastically to his straightforward message and powerful preaching style.

Now thriving with more than 42,000 members, Prestonwood continues to grow. In 2006, the church began a second location, the North Campus, in a burgeoning area 20 miles north of Plano, and the church also has a flourishing Spanish ministry, Prestonwood en Español.

Dr. Graham is a noted author of numerous books, including Man of God, Unseen and a new book, Angels: Who They Are, What They Do and Why It Matters. His passionate, biblical teaching is also seen and heard across the country and throughout the world on PowerPoint Ministries. Through broadcasts, online sermons and e-mail messages, Dr. Graham addresses relevant, everyday issues that are prevalent in our culture and that strike a chord with audiences worldwide.

He recently served as Honorary Chairman of the 2015 National Day of Prayer and he has served as President of the Southern Baptist Convention, the largest Protestant denomination in the country with 16 million members.

He and his wife, Deb, have three married children and eight grandchildren.