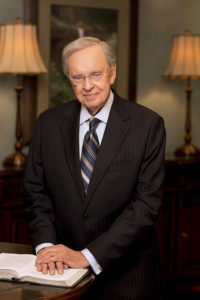 In Touch with Dr. Charles Stanley

Dr. Charles F. Stanley’s 50 years in ministry reveal a lifelong dedication to lead people everywhere into a growing relationship with Jesus Christ. Dr. Stanley is the founder and president of In Touch Ministries, whose “In Touch with Dr. Charles Stanley” radio and television programs have been translated into more than 100 languages.

The worldwide impact of In Touch Ministries starts inside the sanctuary of the First Baptist Church of Atlanta. Dr. Stanley’s sermons are recorded live, then brought to In Touch’s international headquarters a few miles away. From there, In Touch content is produced, edited, duplicated and distributed around the world by television, radio, internet and a monthly devotional magazine.

Back to Teacher’s Page