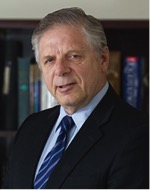 Walking in Your Anointing

Dr. David E. Schroeder has been in ministry since 1969 when he started working for Christian Publications. Church, missions and Christian higher education have been the arenas of Dr. Schroeder’s ministry since the mid 70’s. In August of 2007, he was appointed to be president of Pillar College.

A graduate of Nyack College, Manhattanville College, New York Theological Seminary and New York University (as well as a dropout of three other institutions), Dr. Schroeder served churches in New York, New Jersey and New England. On the missional front, he has served overseas and at home with the Christian and Missionary Alliance, Trans World Radio and International Teams, and continues preaching ministries in Latin America, Africa, Asia, and Europe.

In Christ-centered higher education, David’s first passion, he has been president of Reformed Episcopal Seminary, Nyack College and Alliance Theological Seminary, and Pillar College. During his twelve years at Nyack, the college and seminary grew from 700 to 3100 students, expanded to six extension sites and developed ten new graduate programs. But more importantly, thousands of students were trained to be “worshipping warriors.”

He currently is president of Pillar College in NJ, and lead pastor at Washington Alliance church in Washington, N.J., along with actively serving on various missions and ministries boards.

Through MasterWorks, a ministry he began in 1986, David is a frequent speaker at retreats and seminars for men, using some of the ten books he has written. Betzi and David have been married for over four decades, have raised three children and are spoiling eight grandchildren.