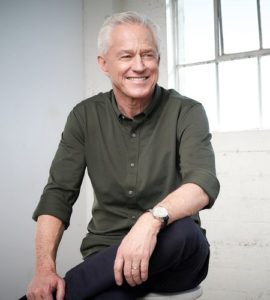 As a graduate of Calvary Chapel Bible College, Twin Peaks, California, Ray served at Calvary Chapel Costa Mesa at the House of Psalms before beginning his pastoral work. In fall of 1977, Ray Bentley founded Calvary Chapel of El Cajon and served there as the senior pastor for four years. In 1981, he left Calvary Chapel of El Cajon to assume the position of assistant pastor / teacher at Horizon Christian Fellowship with Mike MacIntosh in San Diego, California. In August of 1984, Ray left Horizon Christian Fellowship to begin Maranatha Chapel where he serves today as the senior pastor.   In fall of 1997, Maranatha Chapel moved into a new 15-acre church facility in Rancho Bernardo that serves approximately 7,000 people weekly.

In recent years, Pastor Ray has taken opportunities to preach at a Billy Graham sponsored crusade in India, as well as other outreaches in England, Scotland, Australia, Ireland, Africa, China, and the Philippines. He has been a featured speaker at Epicenter Conferences with Joel Rosenberg and numerous other national and international pastors conferences and ministry events. As a close friend of the late mayor of Ariel, Ron Nachman, Ray has also become deeply involved in Israel and launched the Nehemiah Project, a ministry of Maranatha Chapel that supports the efforts of numerous outreaches and organizations in Israel including the Joshua Fund, the Nazareth Baptist Church, Hope for Ishmael, the Jewish Agency for Israel, and the American Friends of Ariel.

In 1992, Ray established Maranatha Christian Schools to equip children, K-12 grade, with the spiritual, social and scholastic skills to foster a better equipped future community of believers. In winter of 2004, Ray dedicated a 100-acre property that houses a campus for up to 2,000 future students.

Ray Bentley is host to the daily Maranatha Radio Show heard on stations across the United States and around the world. He has authored five books and numerous booklets and other resources. Ray is married to Vicki; they have two grown children and six grandchildren.

His newest book, The Holy Land Key: Unlocking End-Times Prophecy Through the Lives of God’s People in Israel, is being released from Waterbrook (a division of Random House).